We are a part of History

TËSSS, was created to save a disappearing, traditional technique and style of weaving in Sénégal, called “Mandjak”. In observing various cultural African artisanal crafts, Mandjak weaving is the most highly perfected, preserving its cultural tradition. Yet, due to economic conditions, this art appears to be the most affected, the most endangered. The weavers are now faced with modern challenges beyond their control: decreased revenue since the 1994 devaluation, increased price of cotton and the rural exodus of their apprentices, who seek more lucrative work in construction and transportation with the current urbanization of Sénégal.

TËSSS has set apart and showcases the Mandjak weavers in a classic workshop, centered on the island, the heart of Saint Louis, Sénégal: a city known for the elegance and refinement of its women, an island where, year round, these artisanal weavers produce intricate textiles, woven in the ancient Mandjak technique, renewing the life of this time-honored tradition. By designing multiple household accessories and personal wearable art objects, preserving the Mandjak style while integrating modern day preferences, we are able to share this tradition and cultural history.

Our project started in January, 2004, with one weaver and his assistant in a studio on the island. We added a sewing workshop for finishing and a small showroom to display their work for our international clientele.

We have displayed our work and collection at three large expositions;

2008 – Exposition Pagnes . . . Panos . . . Dakar, sponsored by the Cultural Cooperation of the French Embassy in Sénégal

2010 – Exposition of the pagne Collection, Saint Louis, during the World Festival of African Arts, sponsored by the Saint Louis Committee 350 and the French Cultural institute, Saint Louis.

Our Permanent Collection is showcased at the Conservatory of Arts and Techniques of Elegance, CAMÉE, located on the island of Saint Louis four blocks south of our Showroom.

References and Distinguished Supporters include

The weavers of pre-colonial Africa, produced narrow strips of woven cloth, using alternating colors.  Seven of these striped, woven bands were stitched together, each band measuring 1.80 m in length. This created the ‘pagne’ a large wrap, a traditional and symbolic garment of many uses.  When the strips were left unstitched, and individually rolled, they were used as a monetary exchange. They were equally used as offerings to neighboring or visiting village chiefs, as well as shroud wrappings used in the style of Egyptian mummies.

With the development of international slave trade, glass beads, trading pearls as well as these beautiful textiles were bartered in the purchase of human slaves. Research and theory indicate that the slave traders, aware of the African Village Chiefs’ preference for textile bands, sought the weavers of the West African Coast to create a new style of ornately rich weaving in the Middle Eastern tradition.  Thus, under the direction and dictates of these slave merchants, the Mandjak textiles became more and more ornate and were massively produced on Cape Verde, a Portuguese controlled territory.

During this period, the Portuguese held substantial power over these regions of Western Africa. Their tastes, preferences and ‘know-how’ were ingrained to the point of permanent influence on the weaving techniques. Local production of these textiles for monetary exchange was certainly to their advantage, thus avoiding the delays of long distance shipping by merchant traders who delivered fabric and textile products from the northern trade routes.

An additional, and unsurprising connection was interwoven between these white men of power and the beautiful women of these regions in Africa.  These same textiles of adornment were offered to the seductive women of the area, and then to their inter-racial descendants, the "Métisses", who increasingly developed the ‘tone’ or definition of style. Their beautiful, almost regal stature and grace, along with their elegance in dress became over time, the ritual of propriety: the Signares of Saint Louis, Senegal. Many ask why, in a country where the last colonies where French, the Portuguese term ‘Signares’ remains to describe these elegant, mixed race women?  The Portuguese presence was extremely important and remains so today at the base of the collective memory.

Within the Mandjak patterns, one is not surprised to see the influence and common characteristics of these designs with those from other Portuguese colonies.  Over time, newly acquired techniques, a by-product of international exploration and trade, added to their expertise and highly developed weaving skills.  These weavers of this region of Africa became the respected “genius” of weaving.  To apply the new techniques, they needed additional ‘helping hands’ to work and weave the intricate designs.  Their apprentices did not fully understand how to execute these extraordinary patterns.  Thus, complex rituals were added to their specialized “guild” initiations.

Today, many apprentices are still neither privy to nor trained in the secrets of Mandjak weaving: not just anyone can be a master weaver. A unique intuition and creative intelligence is necessary to design and reproduce a motif, freely and without aid, explanation or pedagogical encouragement of a master. As explained by an accomplished weaver,“one is an apprentice for as long as the master determines. To emancipate, this apprentice had to silently observe the masters techniques, without his direct instruction” It was much later that he took the risk, himself, to accept and fulfill an order using his own loom.  It was at that moment, only, by the force of his relentless determination that he succeeded in overcoming the hurdles to “build” his own designs or motifs.   With this new freedom, he no longer returns to his master.  He, himself, now relies upon the assistance of an apprentice. 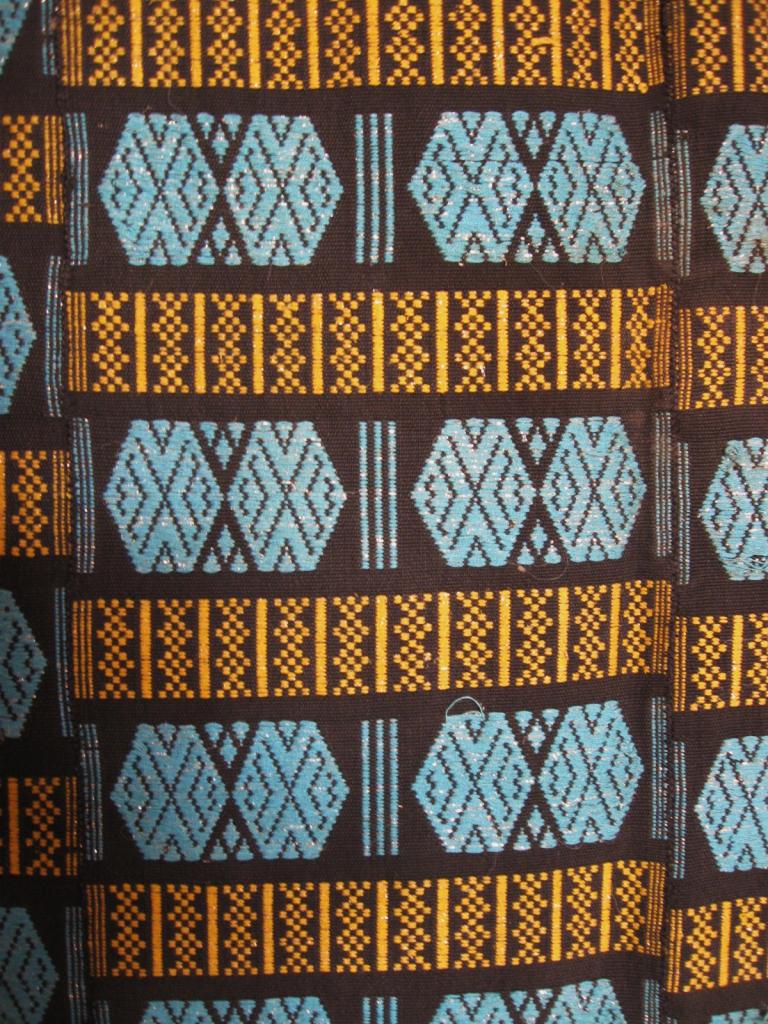 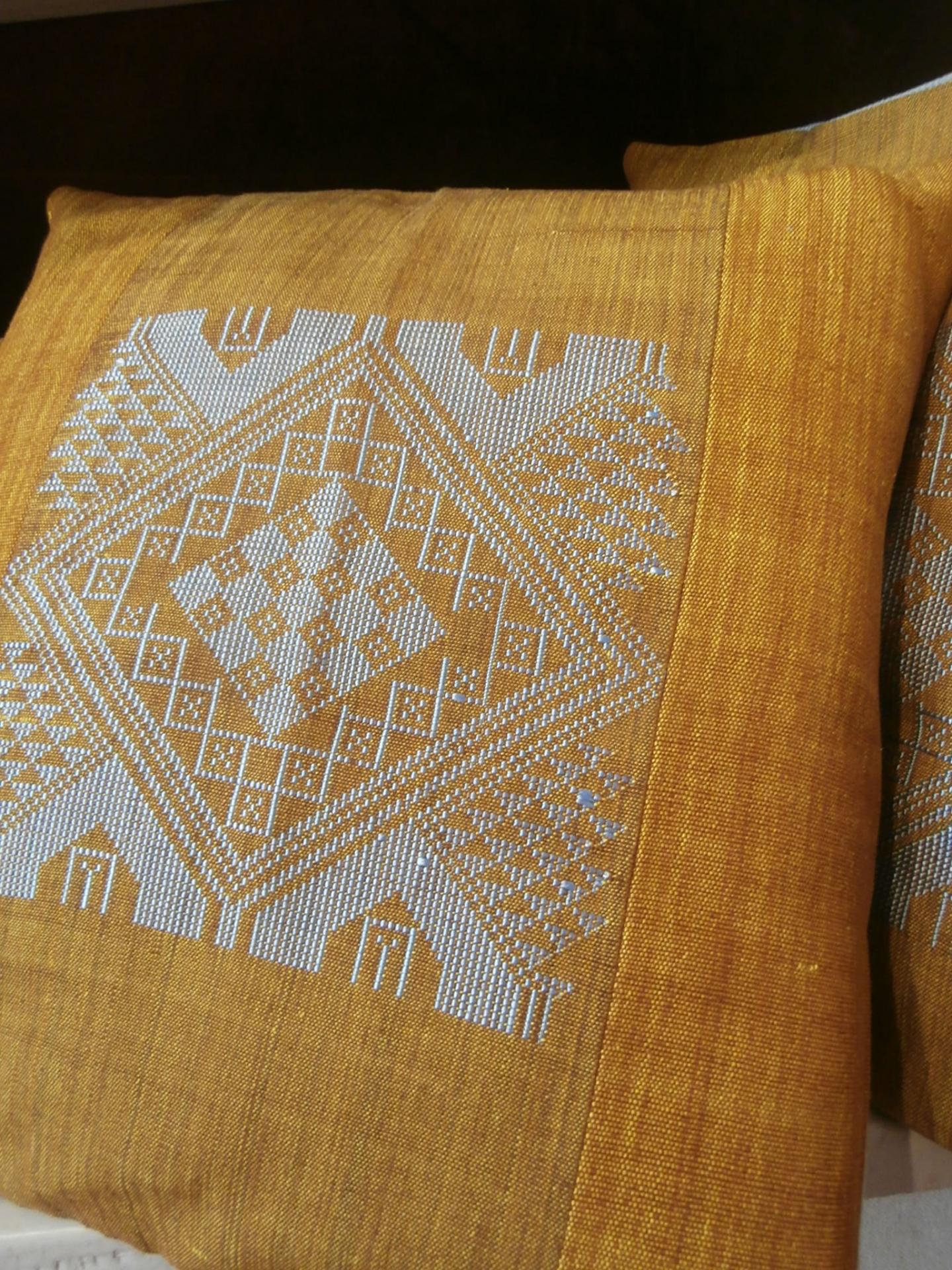 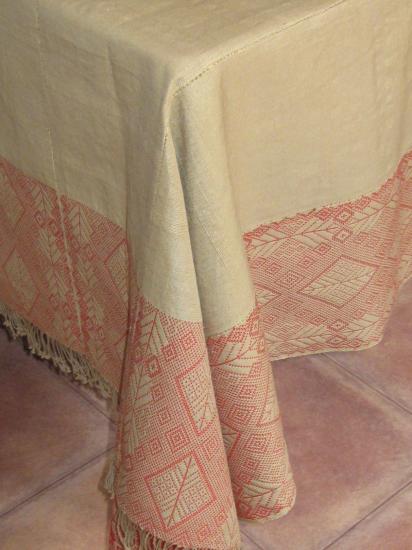 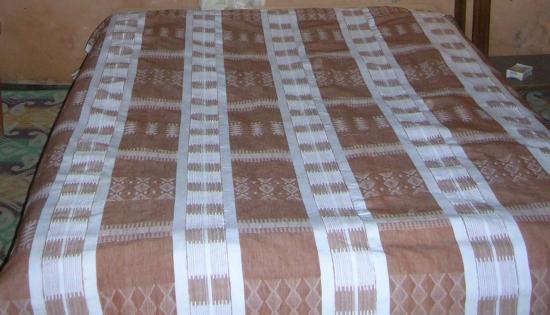 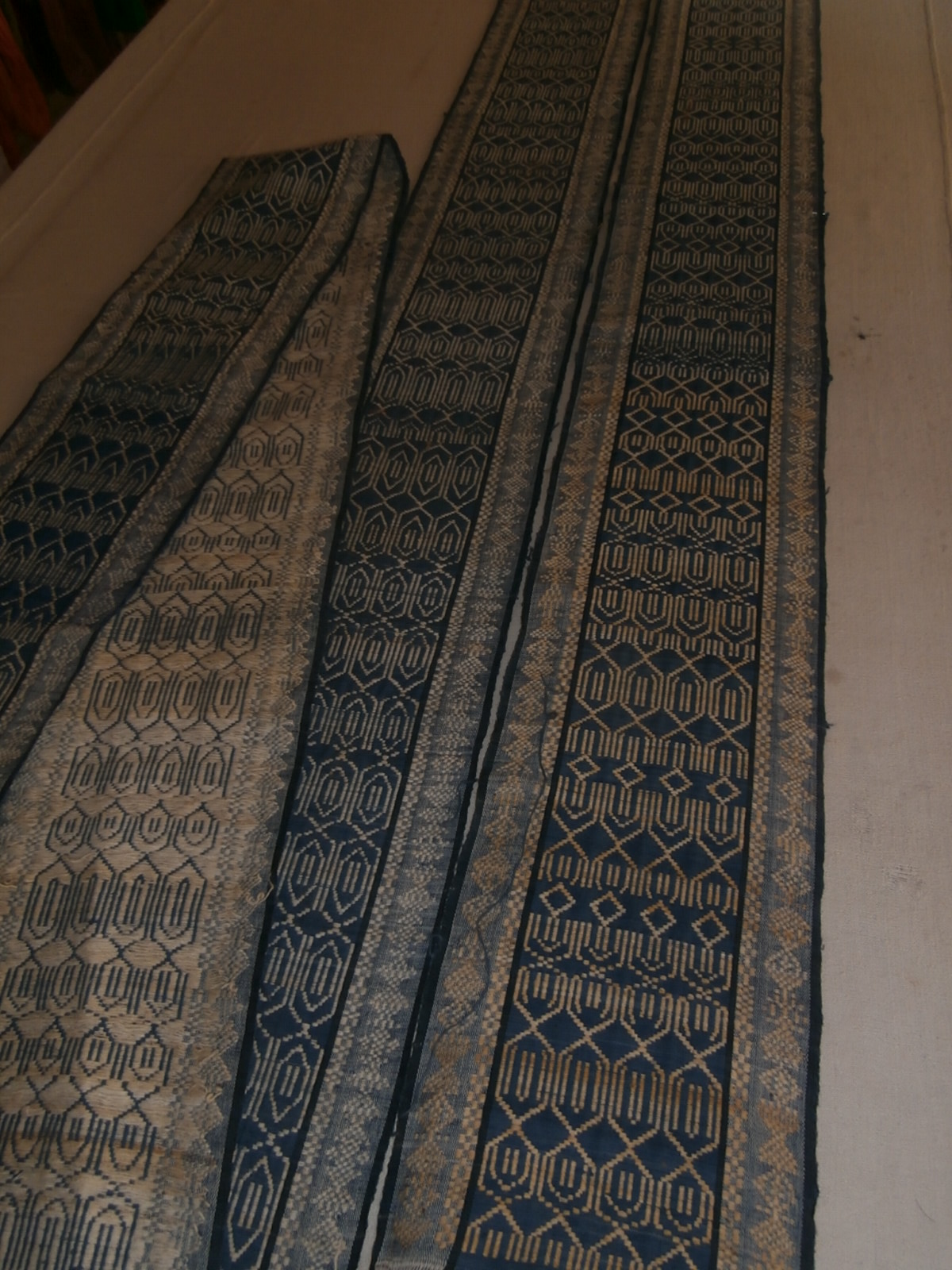 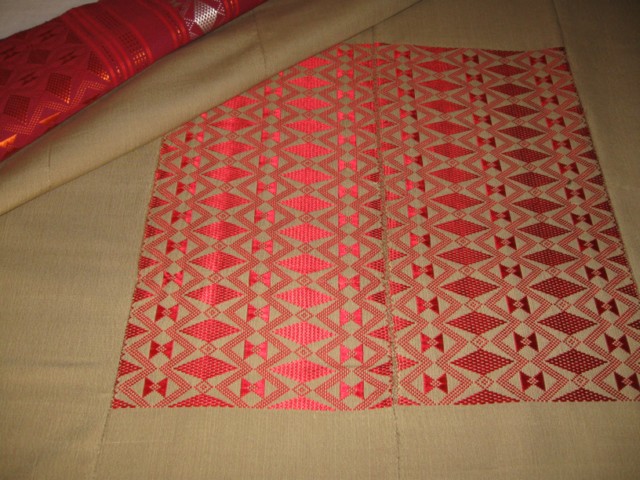 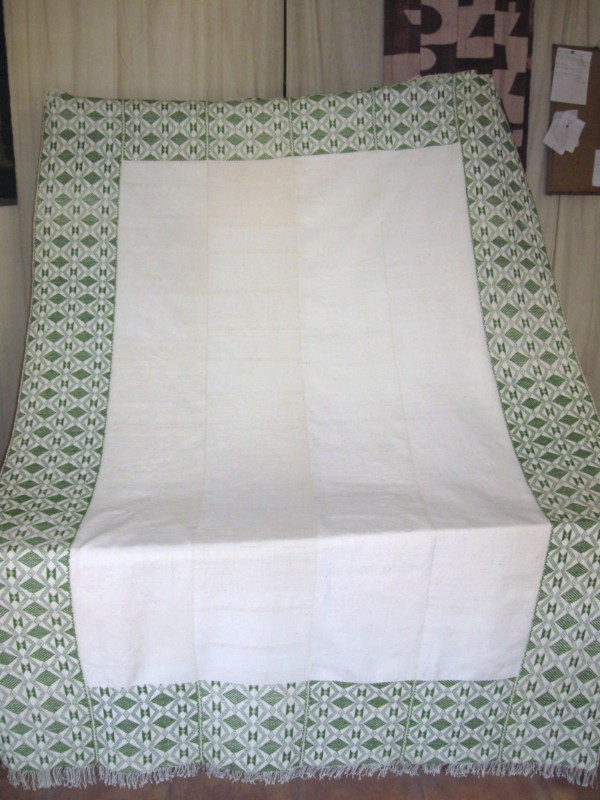 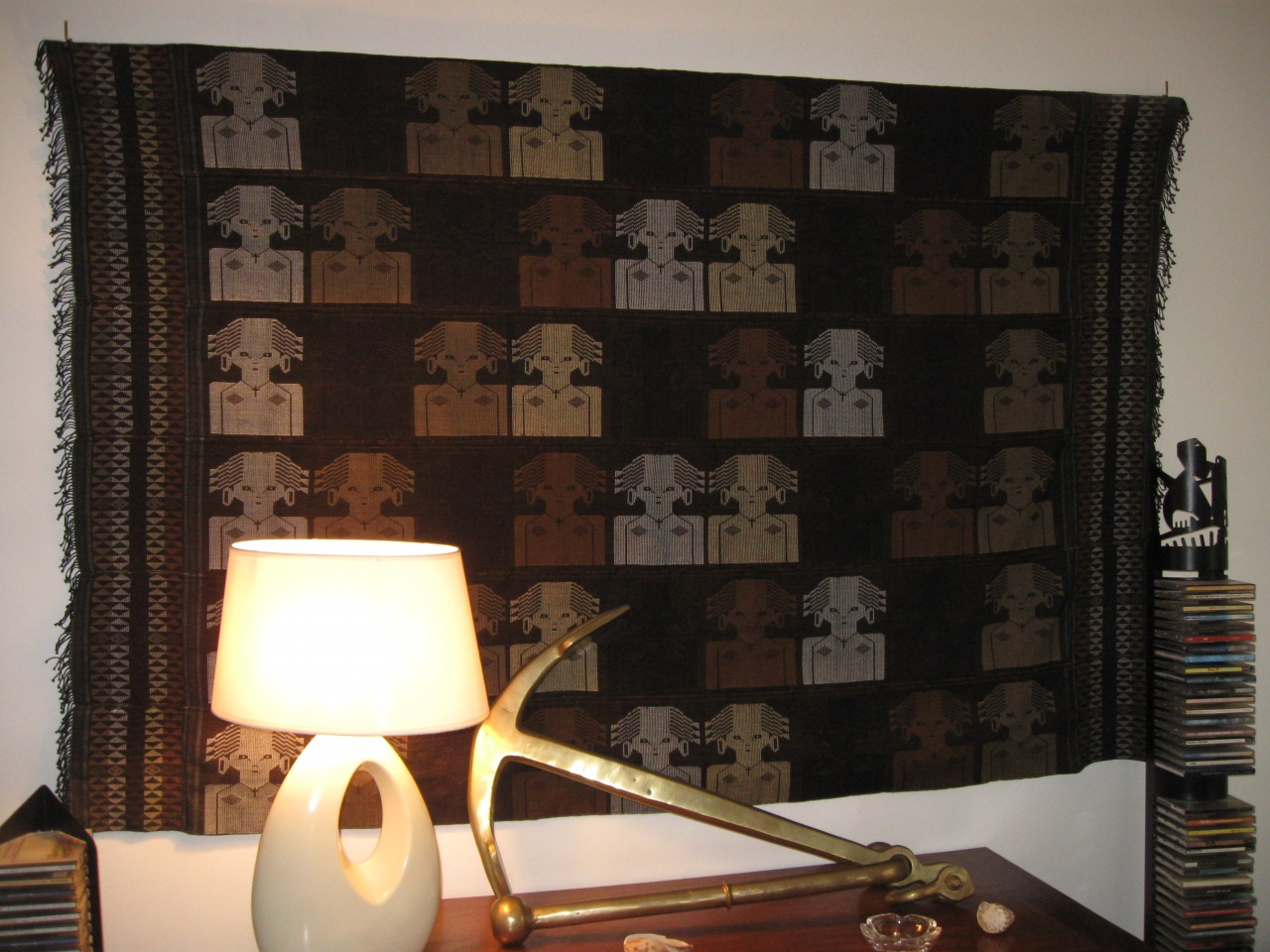 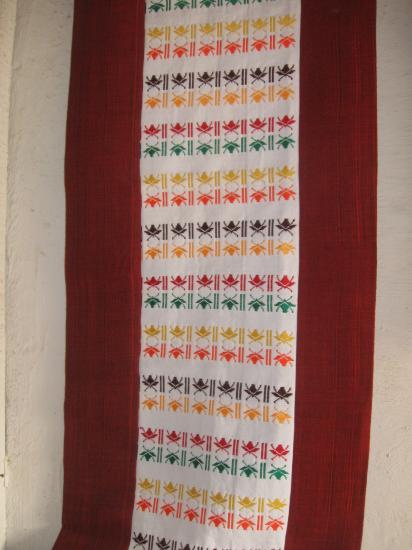 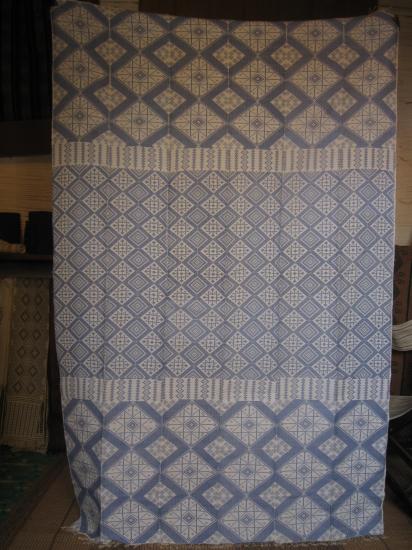